When [Jesus] had thus spoken, he spat on the ground, and made clay of the spittle, and anointed his eyes with the clay, and said unto him,
“Go, wash in the pool of Siloam”
(which is by interpretation, “Sent”). He went away therefore, and washed, and came seeing (John 9:6-7).

“Cleanliness is next to godliness,” or so they say.

Humans put a premium on cleanliness. Every morning most of us go through a series of rituals to divest ourselves of all that is reckoned unclean, put on clean clothes, and attempt to make ourselves look, feel, and smell as clean as possible. For the most part we try to limit our interactions with the “contagion” of dirt and uncleanness: we walk or drive on paved sidewalks and streets, we want food preparation and consumption to take place as cleanly as possible, and we have designated facilities to dispose of those bodily functions we find smelly and unclean. Woe to those who do not observe such cleanliness in habit and ritual; they are quickly socially marginalized.

This obsession with cleanliness goes beyond the realm of physical contagion. People these days want everything to be as “clean” as possible. In attempting to “put our best foot forward” we are tempted to whitewash our image and present to the world only that which is good and aesthetically pleasing and attempt to hide the ugliness, pain, and other unseemly parts of life. We may seek relationships with other people but we want those relationships to remain as “clean” as possible; we would rather not deal with other people’s drama and difficulties, especially if those difficulties may cost us in terms of time, energy, and (by no means!) personal reputation. In such an environment too many just want to pretend that the “dirty” or unclean parts of life are not there; whenever they arise we try to suppress them, medicate them away, or otherwise avoid them. We must always put on the impression that we are clean and have it all put together. No one wants to deal with a mess.

Many times cleanliness is justified religiously. God, after all, is pure and holy, without spot or blemish (Leviticus 19:2, Habakkuk 1:13). In the Law He specified all the ways in which Israel was to remain clean and what to do whenever they were rendered ritually unclean (e.g. Leviticus 11:1-15:33). As God is holy, so Christians are to be holy (1 Peter 1:15-16); Christians should be pure (1 John 3:3). All of these statements are true; God is holy, and wants people to be holy. God’s people should never wallow in the mire of sin and death!

And yet none of us are clean by our own merits; we have all sinned, and have all fallen short of God’s glory (Romans 3:23). Our society may have phobias about that which is unclean or dirty but they are part of life. As it is written:

And YHWH God formed man of the dust of the ground, and breathed into his nostrils the breath of life; and man became a living soul (Genesis 2:7).

God is our Creator; He made man in His image, the image of the Father, the Son, and the Holy Spirit (Genesis 1:26-27). God made all things through the Word; without the Word nothing was made that exists (John 1:1-3). That Word became flesh and dwelt among us as Jesus of Nazareth (John 1:1-14).

Thus God made man from the dust of the ground; the Word was active in thus making man. None of us were there to see exactly how this took place; nevertheless, as humans, we are tempted to envision the event described in Genesis 2:7 as God using His “hands” to make man out of the dust of the ground. In so doing, by necessity, God would have dirt on those “hands,” and even after making man, His “hands” would have been made dirty in the process.

Furthermore, it would be God the Word who would be getting His “hands” dirty, and would again in the Incarnation. Not for nothing does Paul speak of Jesus as the “second Adam”; granted, he does so in order to show how Jesus, through one act of righteousness, could make right all the sins that had come from the one transgression of Adam (Romans 5:12-18) or make comparisons between this body and the body in the resurrection (1 Corinthians 15:20-49). Yet it remains true that Jesus became human, and as humans are dust, so we can say that Jesus took on dirt and dwelt among fellow pieces of dirt (Genesis 3:19, John 1:14). Jesus took on dirt and participated in life with mankind, and that life was invariably dirty. Jesus would have gotten dirty while eating, while relieving Himself, while walking down the road, etc. God Himself participated in man’s dirty condition, although without sin (Hebrews 4:15, 5:7-8)! 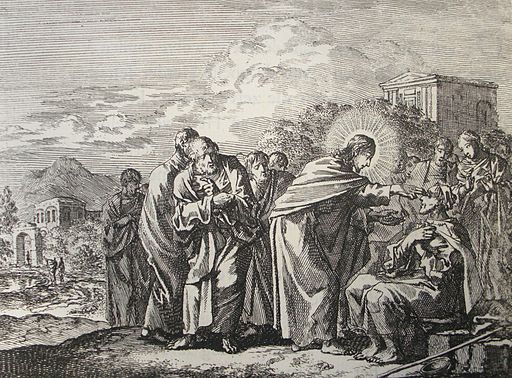 Jesus became dirt and lived among pieces of dirt in order to make us clean, in a sense, to heal the dirt. Therefore it was entirely natural for Jesus to heal a man born blind by spitting on dirt and covering the man’s eyes with the clay (John 9:1-5), even though it may seem strange to us. The healing was by no means sanitary, yet Jesus uses dirt to heal dirt; as the “hands” of God the Word formed and shaped man out of dirt, so now the hands of Jesus of Nazareth use dirt to heal what had gone wrong with this particular man. Later on Jesus will take on the cross and suffer terribly, get extremely dirty and become an object of horror and shame, and in so doing provide a means of healing and cleanliness for all mankind (John 1:29, 19:30, Ephesians 5:25-27, Titus 3:3-8).

We humans put such a premium on cleanliness because of our great shame and disappointment at what is unclean about us, physically, mentally, emotionally, and spiritually. We do not become clean because of how well we clean ourselves or how well we try to suppress that which is unclean about us from public view. We can only be made clean through humble faith in Jesus who became dirt and got extremely dirty so that we could be healed and cleansed. He did this not because we were clean and thus deserved a relationship but while we were extremely filthy and unclean (Romans 5:6-11). God was not forced to deal with us in our impurity, defilement, and uncleanness; He could have abandoned us to our own fate. Yet, in love, He chose to get His hands dirty so we could get clean. If we would honor God and reflect Jesus to others we must not presume to be so sanitary and clean so as to have nothing to do with all the dirt out there; far from it! If we would be as Jesus we must work to heal dirt, to love people and seek their best interest no matter how dirty they are, no matter how ugly their problems, no matter how many times they may try and fail, no matter how well or poorly we can relate to their challenges and difficulties. We are not to do such things because they deserve it, because they do not. We do it because we have received that grace from God, were cleansed even though we did not deserve it, and want to reflect the God who gets dirty in order to heal and restore mankind. Let us follow the Lord Jesus, find cleansing in Him, and accomplish His purposes in the world!